Context :
As stated in PuRe 1, and confirmed in PGP-4 we have gathered data to optimize the distribution of PAL for deposits with April and the cataclysmic early May data. This is the last update as the program is reaching its end. We intend to propose a renewal in the next weeks, with a transparency report on the DAOs spendings for the handover of treasury to the Community Multisig.

Reminder : The LM campaign was created to push the deposit pools to proposal threshold, this goal hasn’t been reached yet, but the stkAave pool is still growing exponentially and we want to use this opportunity to make palStkAave the default wrapper. 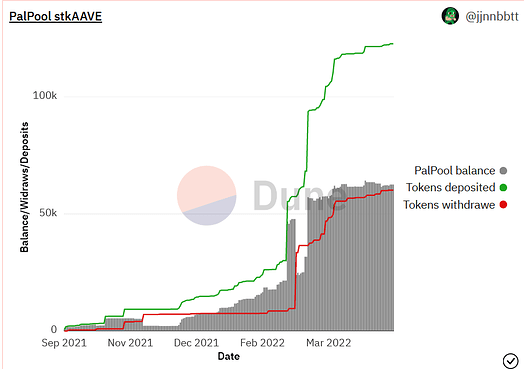 Rationale :
The markets are bleeding very hard with the Terra implosion this week. PAL stood out quite well which means that APY increased significantly. Despite all of this and even having raised LM, the stkAave pool is at a standstill.

We want to keep rewarding depositors while limiting the selling pressure for now.

This LM program is set to expire towards the end of May. We believe it should be extended and will post a proposal soon on the topic.

Means :
None outside of gas spendings to adjust mining output.

Voting Options :
No / Not voting will execute the changes

As we have seen, despite the market dump, the $PAL is doing well compared to the market

but I don’t necessarily understand why we have to reduce the rewards of the aave/palstkaave curve pool or the palstkaave pool?
The apy may have increased, but the position ($) has decreased, I farm as much $PAL as before the dump, and we see that there has not been much selling pressure

On the other hand, I agree on the change of reward PAL->hPAL !

The question is more of the opposite. Why don’t we reduce them ? if APY is higher but it hasn’t attracted capital, why spend so much money on it ?

Maybe 30k PAL / month on the palStkAave Curve pool during 1 month or until Gauge ?
-50% yield is maybe a bit excessive (imo)

I agree with Starny here, it’s true that we need to be careful about the liquidity mining, however these are extreme measures discussed: -50% on Curve, -40% on Paladin and -100% on APWine with an token swap and -100% for Uni.

Tbh not sure about the Uni pool, maybe it’s worth it to focus on StkAave but there is around 300K$ in UNI on Paladin that might leave without LM. I agree 35% is important (even if this is related to the market dropping), maybe we could try to reduce to 5K/month first ? Unless if we dont mind loosing some UNI TVL for now, in which case we could stop it

About the Curve pool, the APR is also higher only because AAVE dropped from 160$ to 80$, however the liquidity on this pool is very important and needed, and I think removing 50% of the rewards to a pool that actually dropped 50% in value may not be the best move if we want to keep the current liquidity.
We might even want to consider increasing the liquidity considering the current slippage for ~10k$ worth of AAVE, in which case we shouldn’t reduce it at all but if the point is to reduce everything, starting from 35 or 30K instead of 40K as mentioned @Starny makes more sense imo.

About Paladin Lending, I agree that the growth has slowed and it’s mostly organic growth now, but we’re quite close of the 80K AAVE, and with the low price it should be easier to reach it, but by moving to 60K PAL/month, we might lose some of these deposits.
Iirc currently there is 100K PAL/month for 21% APR with 60K AAVE, so we could progressively lowering it and see how it goes, maybe 75K is a good start ?

About APWine, I agree about the token swap idea, and it make sense to not have both LM + vote to allocate more APW rewards on the pool, but a token swap needs to be voted by both DAOs and maybe split on several tranches to have average prices. It also depends of the amount to be swapped to consider how much votes would be redirected so how much APR etc.

For these reasons I believe we should wait for it to be voted and swapped to fully stop the LM, but we discussed on the last LM adjustment post to start with 15K PAL/month for 2 weeks before lowering it to 10K PAL if it doesn’t grow.
The LM started one month ago, I don’t have the exact numbers of tokens, but when the LM started, the pool was around 620K$, and it went up to 930K$ iirc, so there was more deposits since AAVE didn’t pump (even if we can argue that this might not be new users), then AAVE price /2, and since there is still 450K$ in the pool, there was probably almost no withdrawal.
So the APWine LM was reduced by 30% after two weeks even if the pool increased in token amount, so I think it should stay to 10K PAL / month until we have more information on the other possibilities such as the token swap.

Finally, fully agree about moving to hPAL rewards to reduce the selling pressure.
So to summarize, imo:

A bit more explanation on how we ended up on those proposed changes:

I wasn’t aware of this, I guess it’s ok to cut this one then

We initially started at 20k/month, and are aiming to return to this value for now.

I think it’s too early considering the liquidity is still not deep enough, and that we still d’ont have a gauge on this pool, earning CRV that might compensate for a 50% reduction of the PAL rewards, it’s probably better to not lower it too much imo.

This was not as successful as expected, hence the change back to the 1st distribution amount.

Maybe not as expected but it was still successful, and I guess if the rewards drop too much we might loose part of the current TVL

Maybe the decrease can be too steep there, and we can try and find a good monthly distribution amount.

Yes overall I think it’s the case for most of the proposed reductions, and 20% APR would mean a -40% of the PAL APR which is what’s proposed, but it’s calculated with a 80$ AAVE, and i’d be very surprised if it stay to this level, however since we can’t based the decisions on market feelings, if the community agree with 20% being a good long term APR for this pool, we could reduce it to match the expectations and increase it again if AAVE get back to higher prices

(so another 10k/month for the last 2 weeks, then the token swap).

You mean that the swap should be done early June ?

A vote like this requires 5 days of voting on APW governance + feedback time on the forum before, so we would have like 10 days to publish, discuss and vote on the proposals, assuming that the swap would be done in one time, which is unlikely because the APW price dropped a lot on the last crash,and because the previous token swap was spread over 10 weeks (which is a bit too long so we could aim for a lower period but it helped balance the short term variations of the market)

This could be done progressively, let’s say over 4 weeks for example, then we could reduce the PAL LM of 25%, and swap, lock and vote on Palstkaave pools with 25% of the token swap value etc

the most seen behavior we saw was users taking palStkAave out of the Paladin Controller, and withdraw half of that from the PalPool to deposit in the APWine PT/Underlying Pool

Imo good that we have a healthy debate on how Paladin should manage teh current downturn.

To complete Koga’s explanations, it is important that LM on APWine has been a complete failure. It brought no extra liquidity tous, worse it actually made us lose 1200 stkAave deposits. Over-spending is a cardinal sin in the current market and we need to stop the bleeding as quickly as possible while keeping the integration healthy.

Keeping the stkAave pool in its current state is of utmost importance as it is a bet that we will be well positioned for Aave’s new tokenomics.
For the Curve pool we doubled the incentives and the pool failed to grow…

We will put up the vote tonight to avoid delaying hPAL switch any further if no further complaints arise.

Still 20k PAL / month on the Curve pool ? no linear decrease ? Or waiting for the gauge ?
Without the CRV rewards I’m afraid some people will leave, especially to go to APWine for example which offers a return of +60% apy atm.

But yes, we should vote quickly to change rewards to hPAL.

I’m sorry, what is the point of offering 50%+ APY if it brought no more liquidity vs 20% ? As long as we don’t have concrete arguments over the matter there is no point in changing value.

For the gauge we have repeated multiple time that it wasn’t a priority. Anyone is free to launch it, but we simply do not have the bandwith to do it in the short term. Gauge votes are extremely taxing events and we have a protocol to build.

I totally agree with the reduction of the emission, that’s not the problem.
I will vote for it in any case, it was only a suggestion (a bit biased certainly, as I am liquidity provider in Aave/palStkAave pool).

To keep the current liquidity, we should actually think about how we can increase the liquidity, because rn there is a huge slippage for 10k+ trades already, so if the TVL divides by two it will become useless imo

I disagree for the Curve pool, it should start by a smaller reduction imo but I agree about other changes

We will put up the vote tonight to avoid delaying hPAL switch any further if no further complaints arise.

We’re repeating arguments here folks and not giving more grounds to them. Let’s let the votes talk for themselves.

We have doubled the APY on the curve pool and it has failed to attract more capital and your answer is to progressively reduce ? Why ? LPs got 2x money for nothing, how is not going back to the original budget a bad thing ?